32 cars signing into the USA Pits for part 1 of the 3rd Annual Sprints4Freedom event. After time trials it was BDM driver Trevor Royer coming away with quick time. Followed closely by a mere 0.006 of a second was Kraig Kinser Sim Racing driver Cole Neuhalfen with Kasey Kahne Racing Sim Team driver of Tim Smith rounding out the top 3. 5 heat races would be scheduled on the program with the top 3 from each heat going directly to the main event.

Cole Neuhalfen take an early advantage on the field. Craig Dunn would battle for 2nd with Cody McCawley. Craig Dunn would start to reel in your early race leader of Neuhalfen after just a couple of laps. Dunn was able to get to Cole’s inside left rear several times but unable to complete the pass for the lead. Cole would continue to go on and win by 0.131 seconds over Craig Dunn and 3rd Cody McCawley.

Tim Smith leading the field to the green flag and moving clear by almost 6 tenths of a second but it was Ernie Williams JR putting a slider on Billy Rowlee in turn 1 and 2. Rowlee returned the slider back into 3 and then the pair would race side by side with Payton Gries chomping at the bit to get by and wait for a mistake from either Rowlee or Williams. Gries with a slider on Williams in 3 and both making contact on the exit of turn 4. Now this brought David Heileman into the mix with Tim Smith driving away from the field. Williams and Heileman took a lap to catch back up to Jeffrey Steward who got lucky after the earlier contact. Williams would throw a slider on Steward in turn 3 on the final lap to take the final transfer spot. Tim Smith wins in front of Billy Rowlee and Ernie Williams JR in 3rd.

Michael Sheridan start on pole. The battle for the minor placings between Dustin Griffitts and Robert Satterfield would intensify. Griffitts would start to catch your leader Sheridan however a move off turn 4 for Griffitts seen him catch the outside wall and bouncing the front end and giving 2nd place to Satterfield. However final lap of heat 4 out of turn 4 would see Satterfield run out of fuel coming to the line and giving back 2nd place to Dustin Grifftts. Sheridan was the winner with Griffitts 2nd and Satterfield 3rd.

KKR driver Britton Roxberry take command of the field for 8 laps. However it was the battle for the minor placings along between 4 drivers. Downard would hold of Tim Nickels followed closely by David Flick and Brandon Igo. Flick made several attempts to get by Nickels but not to be. Nickels would really put the pressure on Downard for 2nd place but it was Nickels who would retire to pit road on lap 7. Roxberry would pick up heat 5 followed by Downard and Flick.

John Harper would be in control of the C main field with 10 laps the journey.
The battle for 2nd between Mike Roxberry and Tim Nickels was an absolute Jim Dandy. Yellow would come out lap 4. Restart and Harper now only 4 laps away from transferring to the B Main from the C. 4 cars would be battling for the final couple of transfers spot to the B main , however disaster struck on lap 8 when Payton Gries made contact with Mike Roxberry and would send Gries and Patterson flipping hard on the back stretch. This would end C main with John Harper, Tim Nickels, Nathan Sedlak and Mike Roxberry making the B Main.

12 cars schedule for 5 positions over 12 laps.
Taylor Howell would be the car in command for the green flag and with the track conditions changing every corner, things certainly would take a turn. Over the first couple of laps drivers would be searching all over the track racing 2 and 3 wide for a couple of laps. First caution of the B main would see Tim Nickels and Alex O’Dell make contact in turn 1 and 2 on lap 3. Restart at lap 7 and Howell still holding onto the race lead over David Heileman. Next lap Heileman would take the lead however in the mid pack all fighting to stay inside the top 5 and looking to advance into the main even it was Jeffret Steward making charges and moving into 3rd spot with 3 to go. Steward and Harper would battle for the final 3 laps for 3rd and 4th.
Heileman would get the win from Howell, Harper, Steward and Tyler Garey home in 5th and making the show.

Team CEDI driver Craig Dunn and Larry Moody would start on the front row for the dash over 6 laps. KKR drivers of Smith and Britton Roxberry would battle side by side for the first couple and then Trevor Royer would also make some moves into position 4 over Moody. Smith on lap 4 would challenge Dunn for the lead on the back stretch however a yellow came out and Dunn would resume the race in the lead. With just 2 laps to go Dunn would find himself at the helm of 7 other drivers all vowing to start off the pole for the main event. Craig Dunn was not to be denied with a front row start and win the dash ahead of Roxberry who stole 2nd away from Smith on the final lap.

A Main
Green flag for the field with Dunn leading and drivers over the first 3 laps of racing side by side 2 and 3 wide all throughout the pack. Lap 3 would see Moody get into the back of Sheridan who then got collected by Neuhalfen in turn 3 and 4 and also getting involved was Ernie Williams JR. Restart order was B Roxberry, Dunn and T Smith. The mover was moving through field was David Heileman and Trevoy Royer who moved into 3rd and Heileman up to 6th. Smith was making moves on the inside of leader Roxberry but it was Roxberry who continued to lead the field. Just past halfway would see Roxberry still holding off teammate Tim Smith with Royer clinching onto 3rd position but here came the 3rd KKR driver looking to sweep the podium and Heileman was now trading sliders with Royer for 3rd. With about 10 to go the tables had turned for the better of the driver of the #49 as he would drive to the outside of Smith and then Roxberry making a massive mistake on the back stretch Heileman would get 2 for 1 in half a lap. With less than 10 to go Roxberry after sustaining damage in turn 3 it was Smith, Roxberry and Royer trading sliders switching lanes left right and center. Not to be outdone and Heileman would seize this opportunity and move clear from the 3 who put on an absolute clinic of a race. Yellow with 4 to go was certainly a recipe to shake things up in the kitchen but Heileman would lead the field for the final 4 laps of the race Royer now moved into 2nd with Rowlee in 3rd closely followed by pole sitter Dunn. Rowlee and Moody for the final 2 laps traded sliders hoever Moody got the better of Rowlee. Both Smith and Roxberry had problems with 3 to go and would go back through the field. Heileman won from position 19 with a stellar drive and coming home in 2nd was Trevor Royer with Larry Moody home in 3rd. 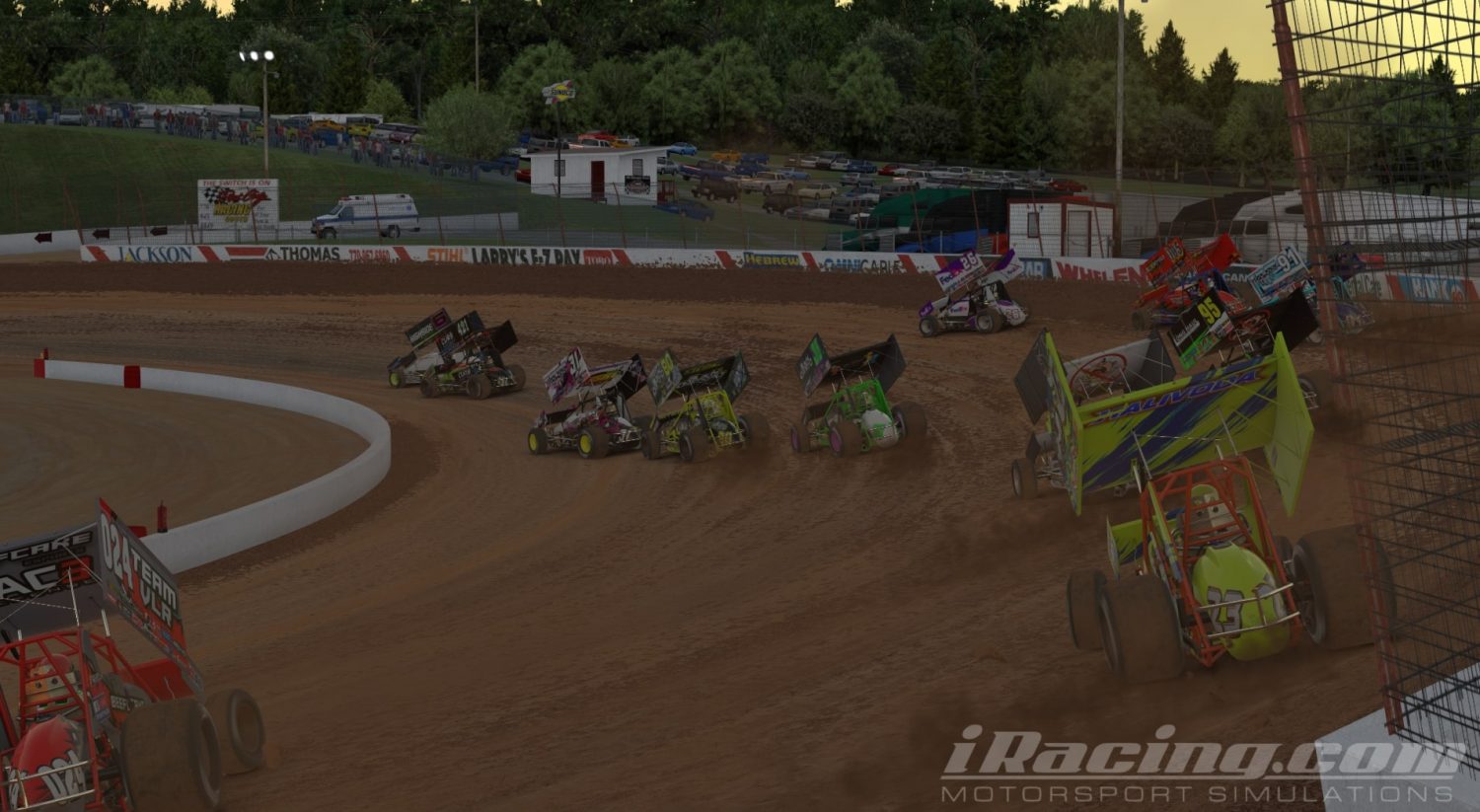 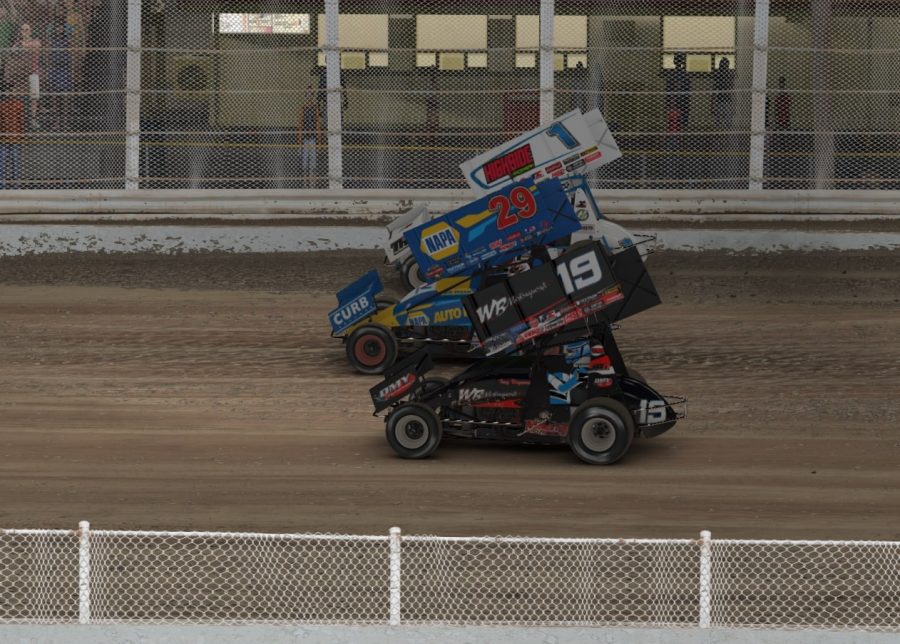 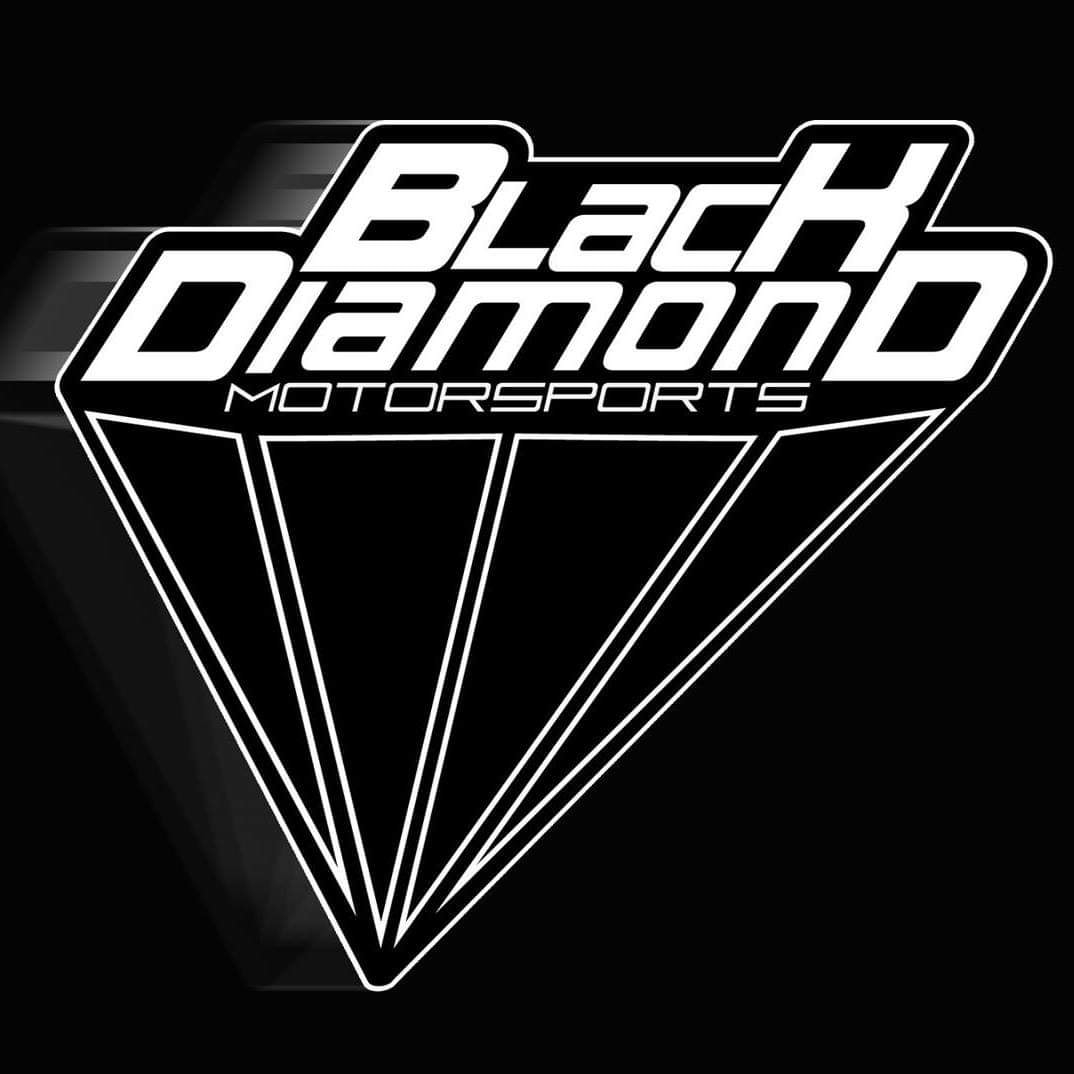